Congratulations to our amazing Patient Advocate, Robert Rodriguez. Robert has been chosen by The Corporate Source (www.thecorporatesource.org) to be the recipient of the 2017 “NDEAM Champion Award.” October is National Disabilities Employment Awareness Month (NDEAM), which is observed by the Federal government statute for advocacy of people with disabilities in the workplace. 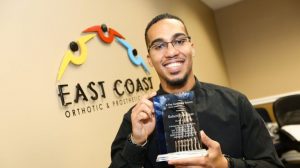 Robert was nominated by East Coast O&P for this award because of his outstanding character, hard work and dedication. He was presented with the award on October 31st in our Deer Park corporate HQ.

He has served as an inspiration to both young and old for what can be accomplished with perseverance, hard work and positivity.

Below is an article from Newsday from November 1, 2017. The full article, written Rachel USA, by can also be read by clicking here:

Bay Shore man who has inspired other amputees honored for work
Robert Rodriguez, who lost his leg below the knee, says he’ll donate a portion of his $3,000 prize to a camp for children who have lost limbs.

On Tuesday, Rodriguez, 30, was given the National Disabilities Employment Awareness Month Champion award by The Corporate Source, a Garden City-based nonprofit that creates employment opportunities for individuals with disabilities.

Rodriguez, whose right leg was amputated below the knee when he was 10 months old, was nominated for the distinction by his employers at East Coast Orthotic & Prosthetic Corp., which is owned by brothers Larry and Vincent Benenati.

“She gravitated to him and he inspired my niece to start wearing a prosthetic,” Larry Benenati said. “He’s been that way with many of our patients.”

A few months ago, the Benenatis nominated Rodriguez for the NDEAM award, for which anyone currently working on Long Island with any type of disability can apply, according to The Corporate Source’s CEO, Michael Kramer.

Rodriguez was chosen out of a pool of 10 applicants. Kramer said he stood out to the panel of four judges for his enthusiasm and commitment to helping other amputees.
“We were looking for an individual who made not only a significant impact in their workplace, but also someone who conveys the contributions someone with a disability can bring to a business,” Kramer said. “Robert is really a shining example of that.”

Rodriguez wears many hats at the Deer Park-based prosthetics company. He’s involved in business development, marketing and patient advocacy, but also runs a support group for recent amputees and often drives patients to and from medical appointments, according to Larry Benenati.

“He’s a very caring person and he’s able to connect with our clients because he knows what they’re going through,” Benenati said. “I think he’s definitely deserving of this award.”

Rodriguez was honored at a ceremony Tuesday and given $3,000 by The Corporate Source and the Claire Friedlander Family Foundation in Huntington. He plans to donate some of the money to Camp No Limits, a nonprofit that stages therapeutic camps for children with limb loss, he said.

“It’s a huge honor,” Rodriguez said. “I was really touched and feel re-energized and ready to go out and do more to help.”